SYSTEM OF A DOWN drummer John Dolmay Doesnt want to Believe Serj Tankian meant when he said that fans who listen to their music and support U.S. president Donald Trump are “hypocrites.”

SYSTEM OF A DOWN drummer John Dolmayan says that he hopes singer Serj Tankian “was misunderstood” when he said that fans who listen to their music and support U.S. president Donald Trump are “hypocrites.”

Earlier this week, Tankian posted the lyrics to one of SYSTEM‘s early tracks, “Temper”, on Instagam, along with a message explaining his political position.

Tankian wrote: “If you love this song or play along to it and love Trump, you’re a hypocrite-just a simple fact :)”

The track includes lyrics such as: “White right conservative might / Killers of Kennedy’s with no fright / The American way!” and “Parade! Laugh! Rejoice! Sing! // We’re the victors of… nothing.”

Tankian‘s views are in sharp contrast to those of Dolmayan, who has praised President Donald Trump in recent weeks.

When one fan asked John on Instagram if he takes offense to Serj‘s comments, the drummer responded: “I hope he was misunderstood when he said that. I don’t believe he thinks that way”

In recent days, Dolmayan has continued to speak out on his political views via social media, writing on Instagram: “To all the people who disagree with my opinions but still listen to what I have to say and argue respectfully I thank you. I thank you for your passion , I thank you for your heart and most of all I thank you for your different perspectives. As to system fans, some of you have been disheartened by my opinions and that’s affected your love of our music , that’s a shame, don’t be , they are just opinions after all. I accept all of you for who you are as you are and hope you understand disagreeing doesn’t mean not caring for each other. You are why all of us in system have what we have and we owe you a debt of gratitude for sticking with us all these years . Whatever your politics you are all welcome , SYSTEM OF A DOWN is for all of you and always will be. Music has the power to bring us all together if we can just put differences aside , thank you all I love you all”

Earlier in the week, Dolmayan accused Democrats of “demonizing” U.S. president Donald Trump and “blaming him for everything under the sun.”

Last weekend, Dolmayan blasted “cowards” who criticize those who think they are “coming from a morally superior position,” saying that they “can’t handle free speech” and “need to be herded along with the rest of the sheep.”

He also called Democrats “the true bigots” who “fought to maintain slavery” and were “directly responsible for 70 plus million abortions, a large majority of whom were black.”

Dolmayan supports Trump‘s claim that his administration has done more for the African American community “than any president since Abraham Lincoln.”

Earlier in the month, Tankian called for Trump to resign and described him as “completely useless” over his handling of the coronavirus outbreak.

Other members of SYSTEM have also been outspoken in their criticism of the U.S. president, with guitarist Daron Malakian telling The Independent: “[Trump is] not careful with his words, and he doesn’t seem to realize that everybody’s listening to him. He does things that would have got another president impeached. Because we live in the social media world our attention spans are so small and so brief… that’s why Trump works, because he makes himself the biggest conversation, and the biggest news, every day.” 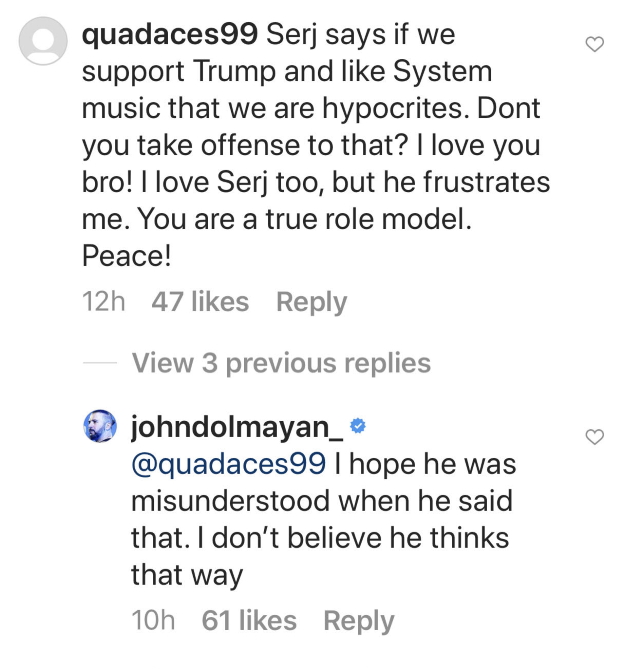 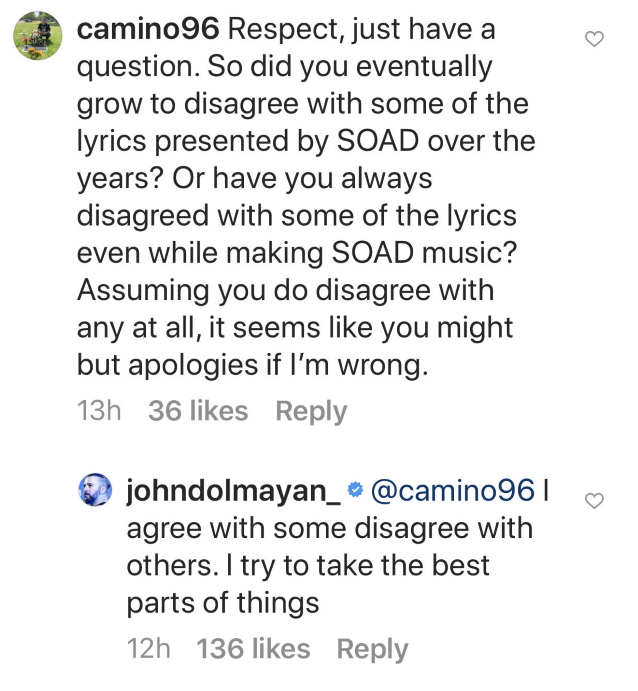