Post Malone on Jet that is attempting emergency landing

Post Malone is currently onboard a plane that’s set to perform an emergency landing after two of the plane’s tires allegedly blew out after takeoff.Malone and his team left from Teterboro Airport in New Jersey Tuesday headed to London. A law enforcement source at Teterboro tells us the private plane’s tires blew off during takeoff and the pilot circled back around to perform an emergency landing. In air traffic audio — obtained by TMZ — the pilot makes it clear, they’ve lost a tire, and ask for permission to circle above … he also makes it known there are 16 people on the plane. 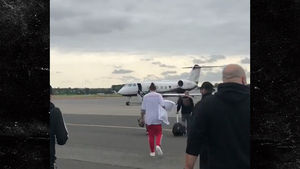 Our source says air traffic control then informed the pilot to continue flight to Massachusetts in order to burn more fuel for a safer possible crash landing. We’re told the plane had 3,700 gallons of fuel to burn.A video — obtained by TMZ — shows emergency personnel on the ground in Teterboro in position for the plane before it was decided they should land it elsewhere. Post performed at Monday’s MTV VMA Awards with 21 Savage and Aerosmith. The rapper also won Song of the Year for “Rockstar.”