Paul Stanley selling guitars that he plays on stage during ‘End Of The Road World Tour’ for up to $18,500

Paul Stanley selling guitars that he plays on stage during ‘End Of The Road World Tour’ for up to $18,500

KISS bassist Gene Simmons may have received some flack for his pricey The Vault box set, which cost ranged from $2,000 to $50,000 US depending what type of delivery that you received from Simmons but now his long-time bandmate Paul Stanley is looking to make a “little more” money by selling guitars that he uses on stage during KISS‘ farewell End of the Road World Tour in 2019.

Guitar prices range from $3,500 for a “Stage Played 6-String Acoustic Guitar” that Stanley will play on the upcoming KISS Kruise IX to $18,500 for a “Gold Cracked Mirror Tour Exclusive Stage Played Guitar” in Australia, Europe, America or the KISS Kruise IX. The guitar price does not include a “stage-used guitar strap” that costs an extra $2,500. Stanley is also selling stage used microphones for the upcoming KISS tour for $4,000 per microphone.

Own a piece of rock history!

“Want a stage played or smashed guitar put in your hands personally by me?
Supply is limited. Reserve yours now and meet me backstage!”

You have a once in a lifetime opportunity to buy an exclusive collectible & meet Paul Stanley!

We do offer payment plans. 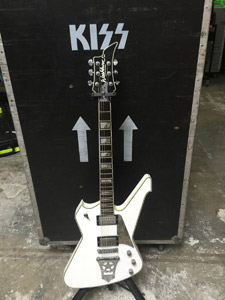 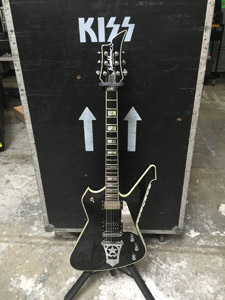 Have you ever dreamed of owning one of the most prestigious guitars in Paul’s collection? These are Paul’s own personal stage-played, touring guitars. Each guitar was used extensively on tour and played at numerous KISS shows around the United States and around the world. Learn more here!