Sofa King Cool caught up with John Wayne Bobbitt on the 25th anniversary of the night his wife cut off his penis, we talk about the night it happened, what led up to it, the other times she assaulted him, the aftermath, how he has dealt with everything, the penis enlargement surgery, last years penis reduction surgery, The Moonlight Bunny Ranch, Searching for Treasure and More

To mark the 25 year anniversary of the castration heard around the nation, Vanity Fair recently caught up with John Wayne Bobbitt and his knife-wielding ex Lorena for a bizarre look back at one of the most salacious cases of the last century. The piece, written by Lili Anolik, is chock full of new, eye-widening details about the night Lorena flung John’s dismembered organ into a grassy field in 1993, and reveals what the former couple has been up to in the years since their relationship was, well, severed.

First, a recap: on June 23, 1993, Lorena Bobbitt (she now uses her maiden name, Gallo) – an Ecuadorian-born Venezuelan who emigrated to the U.S. in 1987 – crawled into bed with her sleeping husband and cut off his penis with a kitchen knife. Just a few hours earlier, as Gallo would later testify in court, Bobbitt had come home drunk and raped her; according to Bobbitt, the sex was consensual and when he woke up to find her fumbling with his boxer shorts, he tells Vanity Fair, “I thought she was trying to get me hard again.” 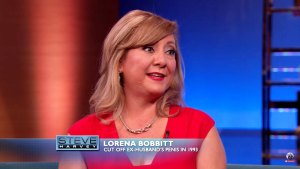 Bobbitt during an interview with Steve Harvey in 2015.

Both Bobbitt and Gallo were charged – marital sexual assault for him and malicious wounding for her, both with maximum penalties of 20 years in prison – and acquitted in separate trials. Gallo successfully pleaded not guilty by reason of temporary insanity, and for the most part, public opinion swung in her favor. Given the current anti-immigrant sentiment, particularly towards people who hail from countries south of border, it’s noteworthy that, back in the early 1990s, Gallo’s story of coming to the U.S. in pursuit of the American Dream made her a more sympathetic victim. It’s hard not to wonder if, in 2018, Bobbitt – an All-American, Trump-supporting ex-Marine with a fake Bob Ross painting hanging above his mantel – might have had had the upper hand. Would Trump’s America be more likely to rally behind Bobbitt’s claim that Gallo was a liar and a gold-digger who maimed him because he was leaving her a year before she was eligible for a green card and, he tells VF, “If she couldn’t have me, no one could”? Maybe.

In reality, though, their lives over the last 25 years further underscore the prevailing narrative. Bobbitt, who has been married and divorced several times since, was convicted of misdemeanor domestic battery against an ex-girlfriend in 1994, charged with battery against his third wife several times, and was also found guilty of harassing another ex-girlfriend in 1999. That same year, he pled guilty to attempted grand larceny of $140,000 worth of clothes. In addition to his brief adult film career and time at the Bunny Ranch, he had a brief stint as a knife thrower (zing!) in the Jim Rose Circus, and has worked various construction jobs. Since 2014, he’s lived on disability, after breaking his neck in a car accident. He’s also had several elective cosmetic surgeries on his junk, first, in 1996, to enhance its length and thickness, and then 20 years later, in 2016, he had it reduced. (“I should have left it alone,” he tells VF.) 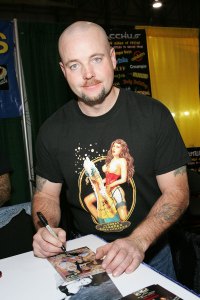 Though she has resisted being deemed a celebrity, Gallo’s American dream will get a little Hollywood polish later this year, when Amazon Prime releases the four-part docuseries, Lorena, produced by Academy-Award Winner Jordan Peele (writer/director of Get Out).  But those expecting salacious true crime infotainment should temper their excitement – that’s not how Gallo rolls.

“With this project, Lorena has a platform to tell her truth as well as engage in a critical conversation about gender dynamics, abuse, and her demand for justice,” Peele said in a statement in April.“This is Lorena’s story and we’re honored to help her tell it.”

Nowadays, Bobbitt  spends his time searching for a billionaire’s buried treasure in the Rockies (seriously!). He continues to insist he is innocent of, well, everything, and actually tells VF that if Gallo had just talked to him that night in June 1993 instead of cutting off his penis, “we’d probably still be married with a family.”

Gallo would no doubt disagree. The former couple couldn’t be more different. Gallo has avoided the spotlight, turning down a million dollar offer to pose for Playboy at a time when she was the sole provider for her parents, who joined her in the U.S. after her divorce. She became a citizen, went back to college and was a proud supporter of Hillary Clinton in the last election. She has devoted much of her time to being an advocate, including starting the Lorena Gallo Foundation, dedicated to the prevention of domestic violence. And she has been married to the same man for 20 years, with whom she has raised a family. (As VF points out, her behavior hasn’t been perfect since 1993 – there was an incident involving her mom that resulted in a battery charge, but she was found not guilty.)

Lorena and John Wayne Bobbitt made tabloid headlines 25 years ago as a marital nightmare turned castration punch line. Though their paths have diverged—advocacy work for her; Frankenpenis for him—their enmeshed stories speak to ultra-current issues of gender politics and celebrity culture.