Sofa King Cool caught up with Cody Hanson from Hinder and we discussed the rescheduled tour dates for  the’Extreme Behavior’ 15th Anniversary Tour were they will be Playing Their Debut Platinum Album Live For The First Time Ever, And The Possibility of it being the 16th anniversary tour, we had an extremely detailed conversation about the future of touring, from routing to crowd distancing, production, fan interaction, merchandise, promoters and more, We discussed how this pandemic might crush some bands financially forcing them to get a 9-5 job, We discussed how Hinder does not plan on releasing new music for awhile, Cody’s side project Dangerous Hippies with Hinder frontman Marshal Dutton and their new single “1982” and how they are exploring different music styles that are unlike Hinder, the writing process for the new band, and putting songs away that they may use for Hinder, we also talked about upcoming live streams shows from Hinder and what is next for the band

Multi-platinum rockers Hinder have rescheduled dates to celebrate the 15th Anniversary of their debut Extreme Behavior.  The band will perform the LP live in its entirety for the first time ever. Extreme Behavior reached #6 on the Billboard 200 and #2 on the Top Rock Albums chart and the second single ‘Lips of an Angel’ became one of the biggest songs of the year reaching the top 10 across several Billboard singles charts, including #1 at Top 40 and Pop 100. Extreme Behavior has since been certified 3x Platinum. Prior to the anniversary trek, the band will be playing a series of festival and one-off dates. Tickets for the gigs are on sale now.

“It’s a strange feeling to think that our first major label album came out 15 years ago! This tour is going to be the first time that we’ve played some these songs since 2005. Going back through the catalogue brings back so many memories of where we were when each song was written. I can’t wait to see how people react to each song at the shows!” Cody Hanson. 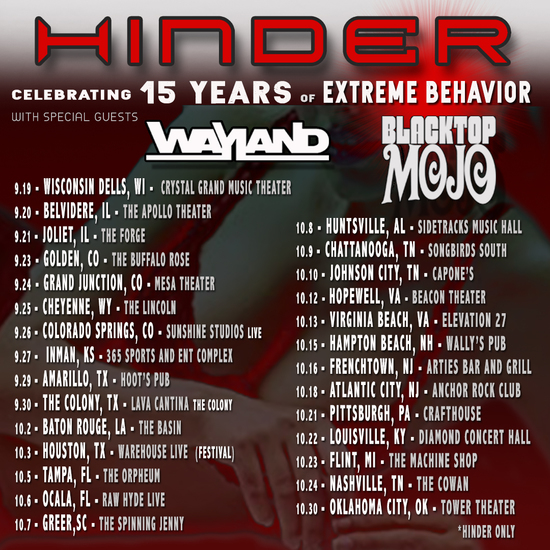 Hinder formed in 2001 and have remained at the top of their game supported by a solid and steady fanbase. The proof is in the numbers, selling over 4 million albums and 10 million singles and amassing more than 150 million video views. The band has also seen more than 100 million streams and growing.

As one of the few rock bands to grab massive cross-over success, Hinder’s 2005 debut album, Extreme Behavior is now certified 3x Platinum. In 2008 their sophomore effort, Take It To The Limit, surpassed their debut by peaking at #4 on the Billboard 200 and hitting the Mainstream Rock chart at #3 with single ‘Use Me.’ This solidified Hinder as the biggest new breakout rock act and catapulting them into packed arenas worldwide with the likes of Aerosmith, Mötley Crüe, Nickelback, 3 Doors Down, Papa Roach, and many others. Hinder proved consistent record hit making by following up with a #1 Top Modern Rock/Alternative Album, All American Nightmare (LP 3), and a #3 Top Hard Rock Album, Welcome To The Freakshow (LP 5).

Website:  http://hindermusic.com
Facebook:  https://www.facebook.com/Hinder
Instagram:  http://instagram.com/hindermusic
Twitter:  https://twitter.com/hindermusic
Dangerous Hippies is the new project from multi-platinum songwriters Cody Hanson and Marshal Dutton who also play as drummer and frontman for Hinder.  Hanson talks about Dangerous Hippies: “Right now our focus is on ‘1982’ but we have several great tracks that are ready to go. We will absolutely be releasing more music soon and we are kicking around the idea of either an EP or even possibly a full-length album later this year.” He adds:  “As far as live performances and touring goes, as with everything else in the world, that’s all a little uncertain at the moment. We are planning on some live stream performances very soon and hopefully we can get out and do some live shows as soon as the world gets back in order. We can’t wait for that!” The pair also recently co-wrote a track for actor Jeremey Renner’s music project called The Medicine and will announce some more collaborations soon.

The idea for Dangerous Hippies unofficially started in 2011 when the two were working as a songwriting/production partnership, before Marshal joined Hinder.  They were approached to write a song for a commercial that was similar to The Black Keys. Once it was finished and they started to share the end result, the feedback from friends inspired them to continue. Cody Hanson says: “We were very inspired and having a blast, so we decided to write more in the same style. It seemed to come naturally and since it had a more raw feel, we could spend more time on writing and less time polishing in the studio.”  Over the years the sound has grown and evolved into a mixture of several styles with elements of rock, pop, hip hop, folk and reggae letting the duo spread their songwriting wings beyond the active rock they are best known for.

Hinder fans should not be worried says Hanson: “Dangerous Hippies was never intended to be a replacement for Hinder. Hinder will continue to tour. However, Marshal and I feel that we have grown as songwriters and producers. We don’t want to be stuck in the box of the “active rock” genre forever. We feel that it’s time to get some of the music that we’ve been working on for so many years out to the world.”

The guys have more than a full album’s worth of material and are constantly writing. Since the music business has evolved so much since the early days of Hinder they know the process of building a new project has changed significantly. Hansen adds ” We don’t want this to be just another side project that releases a song/album and then disappears.We plan on taking the time to build this the right way and to build the fan base that will appreciate this new style of music.”