Did You Notice This Terrifying Reference In ‘The Walking Dead’ Credits? Plus Abe’s Goodbye, And Glenn’s Makeup Process in Daylight

After waiting years for him to be introduced, and then months waiting for his victim to be revealed, it’s now fair to say that Negan is here to stay. And, given that we knew that this savage villain would be in #TheWalkingDead for some time, it shouldn’t come have any surprise to see Jeffrey Dean Morgan’s name added to the series’ opening credits:

Not only does Jeffrey Dean Morgan’s credit include the handle of Negan’s baseball bat Lucille, but sitting there in the fire is another of his favor methods of punishment: an iron.

We’ve already seen evidence of what Negan’s iron can do in the TV series, but for those of you uncertain, here’s a quick run down. In the comic series readers are introduced to Negan’s compound in Issue 105, and in that same issue we learn about Negan’s ruthless way of punishing his Saviors.

In order to keep his men in line, Negan requires all of them to follow a strict set of rules, and if they break the rules they get a burning iron applied straight to their face.

It’s possibly the most sadistic form of punishment ever, permanently branding those who break the rules for life.

And, while we’re yet to see Negan’s main compound or his iron make a proper appearance in the series, we’ve already seen one of his men bearing its mark:

Following the shocking events of The Walking Dead Season 7 premiere, actors Steven Yeun and Michael Cudlitz have prepared some touching videos to say a proper farewell their fans. Take a look below and see if see if the heart warming gestures from their fellow cast mates don’t have you welling up just a tad:

Those kisses!! Steve Yeun and Glenn will definitely leave an enormous hole in The Walking Dead family.

Farewell, Big Red. We salute you. You served your community well.

Going into Season 7 we knew that there was a good chance we would lose a character who had been in the series since the beginning, and sadly it happened when Glenn was brutally disposed of. But part of the reason that Glenn’s death was such a shocking moment was the fact that we haven’t lost an original cast member since Season 3!

It’s crazy to think, but it was way back during Season 3, Episode 16 that we bid farewell to Andrea after she was bitten by the reanimated Milton as she struggled to escape her prison. Since then, the original Atlanta camp survivors Rick, Carl, Carol, Daryl, Glenn (yes, also technically Morgan) have unbelievably managed to sidestep death at every opportunity. Now, unfortunately, the Atlanta 5 have become the Atlanta 4, and there’s no doubt that the group will feel this death for months and years to come.

2. Abraham’s last words were legendary but his gesture said it all

It caught me by surprise that Abraham, knowing he’d been singled out to die, didn’t attempt to tell Sasha that he loved her, or address the group in any way in his final moments. Instead it seemed like he stayed a legend right ’til the end, defiantly telling Negan to “suck my nuts,” as Lucille rained down upon him.

While his final words were rather comical, it does appear that Abraham was a little more sentimental than his last words would have us think. Redditor JuicedMilk pointing out that as he awaited death, kneeling straight up and staring into Negan’s eyes, Abraham flashed Sasha the peace sign.

For the last time, peace out, Abraham.

Did you spot this heartbreaking moment during #TheWalkingDead premiere? Read more at: https://t.co/lU7FVDtBtA @HuffingtonPost pic.twitter.com/3vZm9Vjy7J

Abraham flashed the peace sign at Sasha, which was his way of saying “I love you” or “goodbye” pic.twitter.com/1S0RNEKwbf

This was an incredibly sweet throwback to Season 6, Episode 11 when Abraham and Sasha flirted as they returned from a patrol. After Sasha told Abraham that she was switching to a different patrol, she walked away from Abe and gave him the peace sign, which he returned. By the end of the episode, Abraham realized he needed to break things off with Rosita, and soon after he and Sasha officially began their relationship. It was a small gesture, but it would have conveyed everything he felt for Sasha in a tiny, private moment just for her.

3. Dwight and Negan’s relationship is not great

Given how much screen time Dwight has been given over the course of the last season, you’d be forgiven for thinking he might be one of Negan’s main men. However, that idea was firmly put to bed in Episode 1 after the Big Bad basically shut Dwight down in front of everyone.

After Daryl threw a punch at Negan (giving us one tiny moment of satisfaction despite the death that punch resulted in), the Saviors immediately restrained him on the ground, and Dwight sprung forward with Daryl’s own crossbow asking Negan “you want me to do it? Right here.” For one small moment it looked like perhaps Negan would tell Dwight to shoot Daryl, but in the end he told Dwight, in a rather condescending manner “no, no you don’t kill that. Not until you try a little.” The line almost seemed to embarrass Dwight, and instead he quickly jumped to help the other Saviors grab Daryl and pull him back, retreating from Negan’s view.

There’s no doubt that over the course of Season 7 we’re going explore the relationship between Negan and Dwight, and get explanations for why Negan seems to hold so much disdain for him, why Dwight and his wife were fleeing back in Season 6, and of course how exactly Dwight received those painful-looking facial scars. Ouch.

Just when you thought the Saviors couldn’t get any more ruthless, just as they’re about to leave the scene of the crime, one of them pauses to take a picture of Glenn’s smashed skull. While this might have seemed weird and morbid — which it totally was — it was also a savage call back to Glenn’s first ever brush with Lucille back in Season 6, Episode 12.

During Episode 12, Rick and the group lead a surprise attack on what they believed to be the Saviors compound (but in reality was just an outpost). Once inside, Glenn was grappling with the idea that he was about whether to make his first human kill ever, when he spotted a bunch of photos that the Saviors had taken of people Negan had bludgeoned to death. It was the first indication that Negan shouldn’t be messed with, and as Glenn was to find out a few episodes later, it was also a massive warning that the group failed to heed.

5. Maggie will have a son

Right at the end of the episode, as Maggie stumbles around surrounded by two pools of blood and brain matter, we saw a flash forward to an idyllic scene at Alexandria with the group sat around a table enjoying a meal. At the top of the table sat Glenn and Abraham, and the whole sequence served to show that life will never be as great as Rick and his group had imagined it was going to be just hours before the events with Negan unfolded.

However, the most heart wrenching part of the whole fantasy sequence was the little boy Glenn was holding on his lap – the son he’ll never get to meet. It was one heck of a gut punch to witness, though it did basically confirm that Maggie, should she keep the baby (which seems likely given that I doubt the writers are about to throw more shit Maggie’s way any time soon) will give birth to a little boy. Small blessings among all the death and devastation, right?

Those who could stand to watch Glenn get his brains splattered praised the show for getting his bulging eyeball just right. It was one thing to see it happen on the show, but the producers rolled a behind-the-scenes clip on The Talking Dead, and damn. 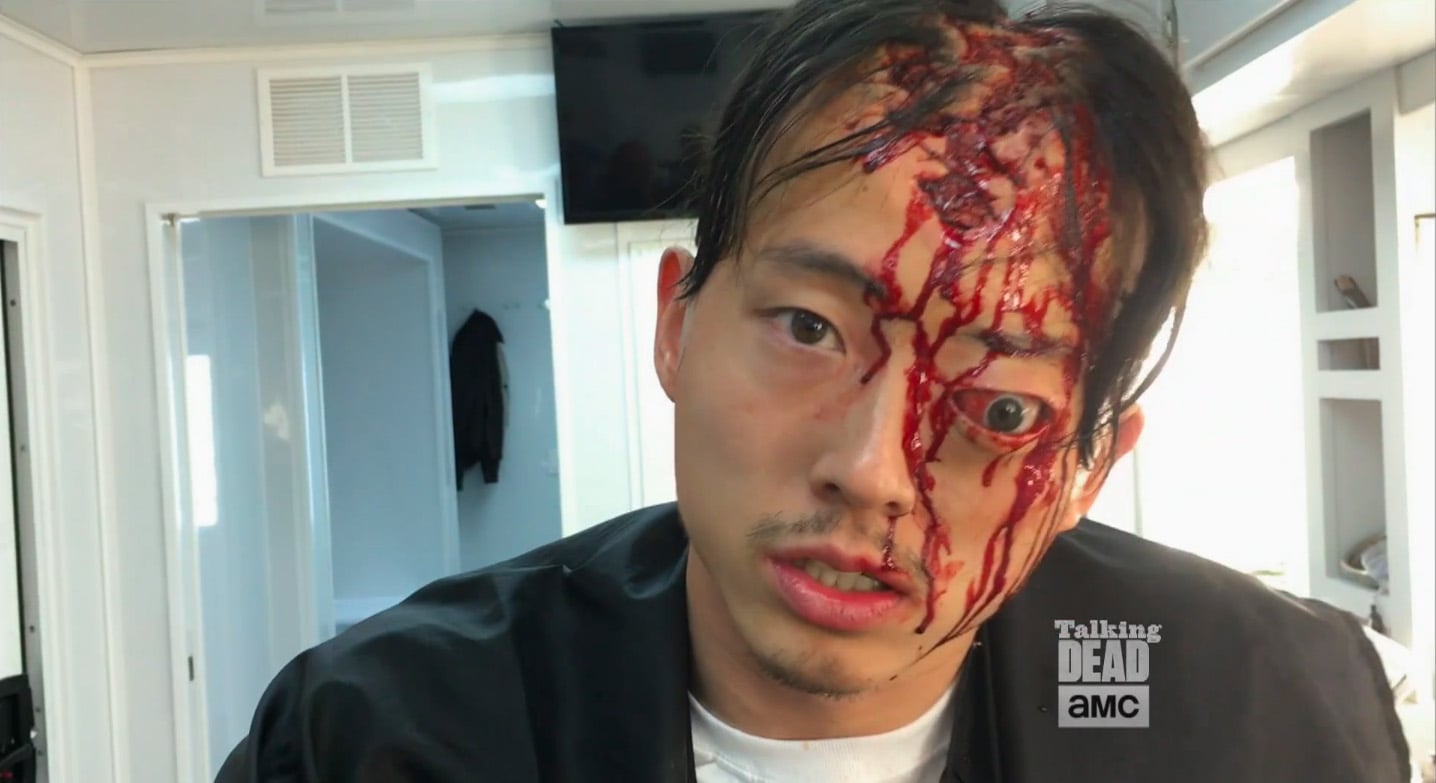 The Walking Dead airs on AMC on Sundays at 9pm ET.