On Thursday, Chvrches called out past collaborator Marshmello for his decision to work with Tyga and Chris Brown on their recent single “Light It Up.” In a brief post on Instagram, the Scottish synth trio said that they were “really upset, confused, and disappointed” by the producer, and that while they “like and respect Mello as a person,” they are unable to “stand behind” him and his decision to work with these artists. Now, Chris Brown has responded to Chvrches’ statement, as Pitchfork points out.

“BUNCH OF LOSERS. these are the type of people I wish walked in front of a speeding bus full of mental patience, Keep groveling over your own insecurities and hatred,” he wrote on Instagram. “IM BLACK AND PROUD. AND I KNOW ITS HURTS THAT U GUYS ARE STRUGGLING WIT LIFE OR PEACE SO U ARE FORCED TO SEE MY SUCCESS. You aren’t even #2 (REMEMBER 2nd place only means YOU LOST FIRST! TA-TA. GOODDAY PEASANTS.”

The band has not yet responded to the statement. In a separate post on vocalist Lauren Mayberry’s Instagram, she screenshotted direct messages she has received since making the public statement. “Angry men on the internet can call me all the names they want,” she wrote. “I still think domestic abuse is wrong. Peace out, internet. Tomorrow is a brand new day.”

Spin has reached out to representatives for Chvrches, Marshmello, and Chris Brown, and will update this post if we hear back. See statements from Brown and Mayberry below. 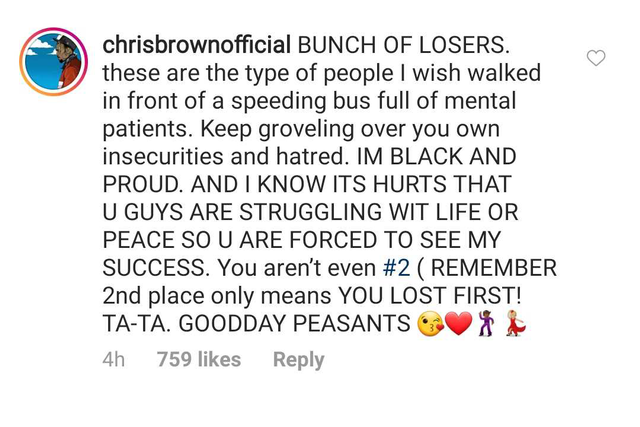 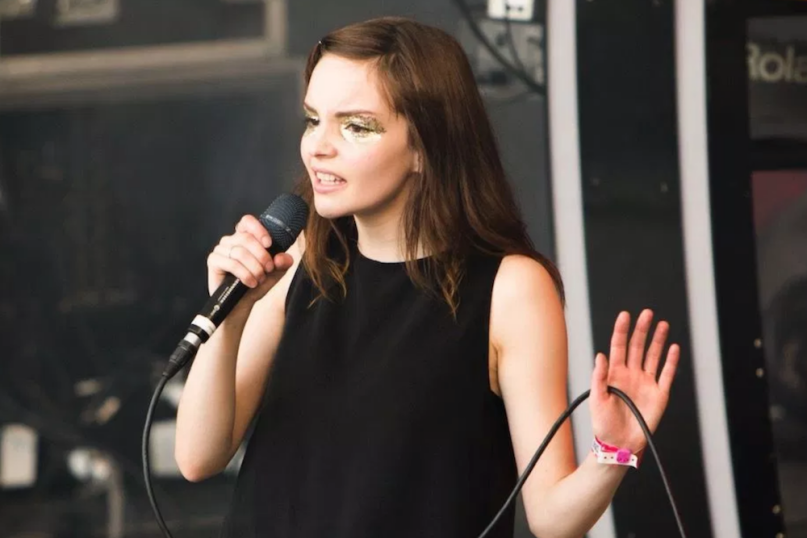 CHVRCHES’ Lauren Mayberry, photo by Philip Cosores
CHVRCHES denounced former collaborator Marshmello last week after learning the electronic music producer had worked with alleged “predators” and “abusers” Chris Brown and Tyga on a new song called “Light It Up”. Brown quickly hit back at CHVRCHES by calling the Scottish synthpop outfit “the type of people I wish walked in front of a speeding bus.”

While the R&B singer’s words were harsh enough, the comments from Brown’s own fans are far, far worse. Through social media, some of these fans have made violent rape and death threats against the band, many specifically aimed at frontwoman Lauren Mayberry.

Mayberry has been posting screenshots of these threats over the last few days, and to call them disturbing would be a grave understatement. One commenter demanded she “keep Chris Breezy’s name out your KKK, cracker whore mouth” or “ima come and bash your fucking skull in.” Another said, “I hope tyga rapes you, then chris brown beats the shit out of you, then R Kelly comes and pisses on your white ass.” 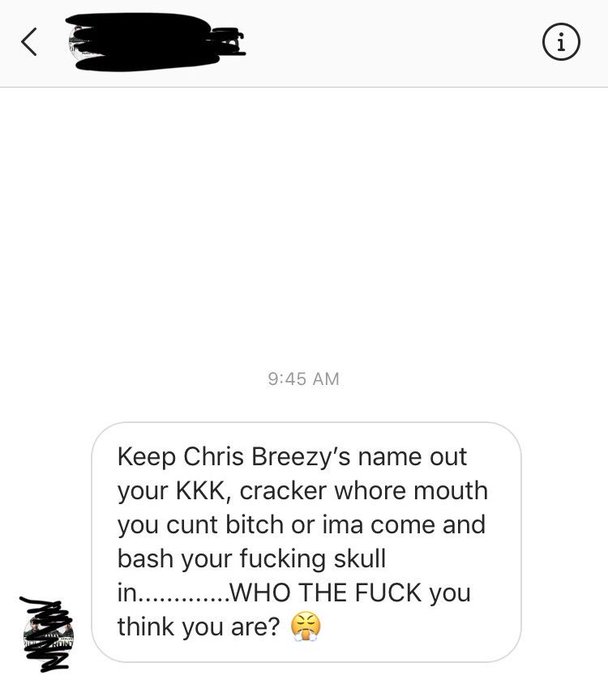 Whore, cunt, bitch and the KKK all in one sentence. Do I get a prize? Bingo? Someone saying they will “bash your skull in” for denouncing domestic abuse is somewhat ironic… #NotSorry 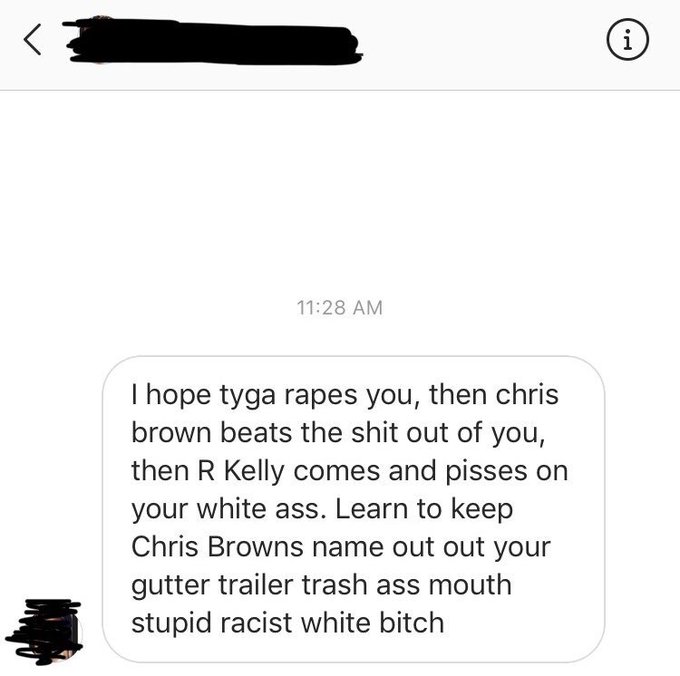 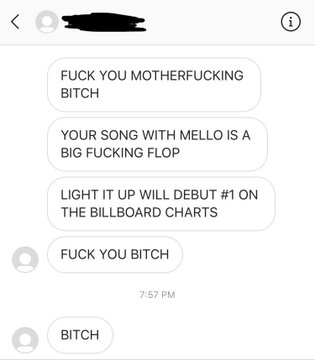 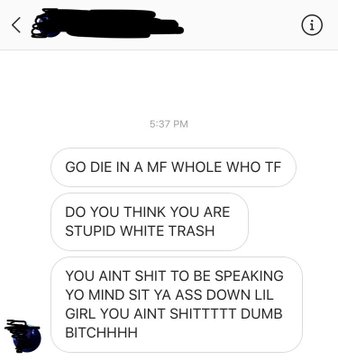 The last “bitch” really helped get the point across

Angry men on the internet can call me all the names they want. I still think domestic abuse is wrong. Peace out, internet. Tomorrow is a brand new day.

Early on it appeared Mayberry was attempting to take the comments in stride. “Angry men on the internet can call me all the names they want. I still think domestic abuse is wrong,” she wrote on Twitter over the weekend. However, it’s now clear that Mayberry and the rest of CHVRCHES are sincerely shaken by the reaction from Brown’s and Tyga’s fans.

In a since-deleted Twitter exchange with Laura Snapes, Deputy Music Editor of the Guardian, on Monday, Mayberry mentioned the increased security detail she and the group have had to hire in light of the threats. She also said she no longer feels safe even in her own home:

“I am not staying in my own home when we finish tour because the threats we have received have reached such a scale. We have to have the police at our shows now. If that’s what I deserve for saying mainstream music should be more morally conscious, then so be it.”

I am not staying in my own home when we finish tour because the threats we have received have reached such a scale. We have to have the police at our shows now. If that’s what I deserve for saying mainstream music should be more morally conscious, then so be it. You’re right.

61 people are talking about this

And again, it is not you who is having to have police presence at shows and advance security in their actual own real life outside of a band persona.

This past Saturday also saw Mayberry talk at length about the Brown and Tyga controversy during CHVRCHES’ set at the Fortress Festival in Fort Worth.

Additionally, Mayberry said that the backlash she’s received from Brown’s fans pretty much proved her point about the kind of person that Brown is and the behavior that he condones through his own actions:

“We were like, ‘maybe don’t promote serial convicted violence to kids… to young people.’ And they were like, ‘well, you know what we’re going to do? We’re going to rape you and shoot you.’ And I was like, ‘oh, you kinda proved the point though.’ So, in a way, I’m like, ‘thanks’.”

Marshmello, the artist at the heart of this whole thing, and the one who connects the two rappers with CHVRCHES to begin with, has failed to address the situation and the way it’s escalated. In fact, his most recent tweets see him polling his Twitter followers about their favorite underground dance artists.

For his part, Tyga took a more conciliatory tone to CHVRCHES’ initial denouncement. “Where [sic] all God’s children,” he wrote on Instagram last week. “Everyone makes mistakes no ones perfect. Let’s Keep the energy positive.” He hasn’t yet addressed the threats aimed at Mayberry and the band.

As a refresher on the criminal records for Brown and Tyga: Earlier this year, Brown was accused of assaulting a woman in Paris. He vehemently denied the allegations, and even went so far as to release merchandise that mocked the alleged victim. Brown, of course, is most infamously known for assaulting former girlfriend Rihanna, for which he pled guilty in 2009.

As for Tyga, a woman who appeared in his 2012 “Make It Nasty” video accused him of sexual battery. The rapper and woman settled the case out of court, but Tyga stalled on paying her the $50,000 they’d agreed on. Tyga was also later accused of exchanging inappropriate text messages with a 14 year old.